In Safe Hands: Degree leads alumna to consumer safety in the FDA

In Safe Hands
Degree leads alumna to consumer safety in the FDA, where she monitors development of drugs

As a college sophomore, Shalonda Clifford ’01 thought she would be a veterinarian. As a junior, it was a marine biologist. By the time she was ready to graduate, she had changed her mind once again and had found a full-time job at GMAC, then a mortgage loan originator and servicer in Waterloo. Though she wasn’t in a biology field, she was gainfully employed and happy living her new adult life.

Her mother wasn’t nearly as happy with the decision and convinced her daughter to return home to Chicago to find a position that would put her biology degree to good use. Clifford submitted her name to a temp agency, which placed her in a research institute testing new drugs and whetted her appetite for work in biomedical research. Since then, she has worked in four states in multiple roles that culminated with her returning to the Chicago area where she has been a consumer safety officer for the Food and Drug Administration for the last four years.

Clifford works in biomedical research monitoring, which means she inspects all of the entities that have a hand in developing new drugs and the continued production of existing drugs, including the lab that does early testing on animals, the businesses and organizations that bankroll the project, programs that run the human clinical trials, the manufacturers, and follow-up on any reported adverse reactions to a product.

“My job is a lot of fun and hopefully I get to teach people a little something along the way,” she said. “It’s also satisfying to come home and feel like I have done something that will help the American people.”

What’s even better, Clifford said, was that she does all of this “with only a bachelor’s degree.”

“I had no idea that working with the FDA was even an option for me, that I could do something like this without going back to school,” she continued.

At Wartburg, Clifford also served on the Black Student Union and gospel choir executive teams. She spent one May Term in Portland, Ore., at the Hatfield Marine Science Center where she studied sea anemones and dreamed of becoming a marine biologist with a fulfilling career at Shedd Aquarium. (That dream came crashing to a halt when she realized she would also have to work with less “cute” creatures, like eels.)

Among her fondest memories, though, were the Candlelight Dinners served in the old Castle Room on the first floor of the student union.

“Big sit-down meals like that, with multiple forks and spoons and courses, were not commonplace for me. This was my first real exposure to dining etiquette and how to have a business meeting over dinner,” she said. “Little things like that were such an awesome part of my Wartburg experience and made me feel very prepared to leave Wartburg and join the workforce.”

Now a pro at business dinners, Clifford is organizing similar meals for her son and his friends through a mentoring program designed specifically for minority children. Clifford sought opportunities to improve her engagement in her children’s school and found Turning the Page, a nonprofit that links public schools, families, and communities to ensure students receive educational resources and a high-quality public education. She attended the organization’s parent leadership conference and came back ready to take a stand.

“These conferences gave me the information and confidence to step out and participate in trying to ensure there is an equitable playing field for my children in Naperville,” she said. 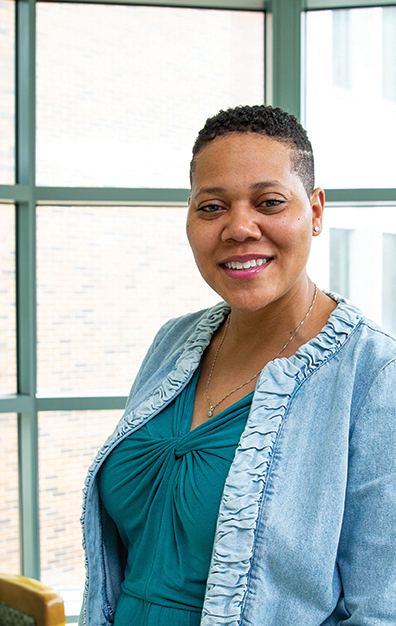