Make Christmas with Wartburg part of your annual holiday traditions.

Christmas with Wartburg has inspired audiences for 75 years. Let the warmth of this one-of-a-kind experience fill your heart and start the Advent and Christmas season for your family. Make this event part of your holiday tradition! The four-concert series includes on- and off-campus performances attended by nearly 6,000 people each year. The program features the talents of about 400 students from the Wartburg Choir, Castle Singers, and Wind Ensemble, which tour annually and travel abroad every third year, and The Ritterchor, St. Elizabeth Chorale, Kammerstreicher (chamber orchestra), Kantorei, and Handbell Choir.

The holiday tradition that began in 1947 was remarkably similar in format to the current production It opened with the audience singing “O Come All Ye Faithful” while the Wartburg Choir and the Chapel Choir processed through the aisles of the Waverly High School auditorium, now the junior high auditorium.

Dr. Edwin Liemohn directed the Wartburg Choir, and Edfield Odegard directed the Chapel Choir in the first production. In what became a tradition until her retirement in 1968, art professor Helen Wright was responsible for the stage setting, which in 1947 featured a nativity scene.

When Knights Gymnasium opened on the Wartburg campus, its stage became the Christmas concert venue, beginning in December 1949. The 1951 program was the first to use the title “Christmas at Wartburg.” By that time, the Wartburg Band and the Castle Singers were included. Many of the early Christmas at Wartburg programs featured works by Castle Singers director Dr. E.A. Hovdesven and Wartburg Choir director Dr. Edwin Liemohn.

Dr. Warren Schmidt joined the music faculty in 1950 and subsequently became Christmas with Wartburg organist for the next 40 years. He recalls moving a portative pipe organ to Knights Gym for the annual program, which by 1953 was attracting an audience of more than 1,500.

Construction of the Chapel-Auditorium, later named Neumann Auditorium, created a new home for Christmas at Wartburg in 1961. Although the program has remained in the auditorium for most of the ensuing years, it moved back to Knights Gym in 1967 and 1968 and from 1976 to 1982.

In 1968, the Wartburg Community Symphony Orchestra, an oratorio chorus, and the Wartburg Choir and Castle Singers performed Handel’s Messiah in the gym, followed the next year by Bach’s Christmas Oratorio, which included the local high school chamber choir and a sixth-grade select choir.

The program moved back to Neumann Auditorium and took on a more dramatic flair in the early 1970s. The Castle Singers and the Wartburg Chamber Players presented A Christmas Carol in 1970 and The Play of Herod, a 13th century musical drama, in 1971, followed by Amahl and the Night Visitors in 1972. In 1973, drama students, the Wartburg Band, Castle Singers, Chamber Orchestra and Gospel Choir were involved in W.H. Auden’s Christmas Oratorio.

Opera star Simon Estes joined the Wartburg faculty in 2002 as distinguished professor and artist-in-residence, and began making regular appearances with Christmas with Wartburg as a soloist and with the Wartburg Choir. Choir director Dr. Paul Torkelson described Estes’ 2006 performance of Sweet Little Jesus Boy as one of the “incredible moments” in the program’s history. Estes retired from Wartburg in 2016.

Large murals were added to the program in 2003. Janice Bergland hand-painted the first backdrops, which were used for more than one program. When Dr. Lee Nelson became the artistic director of the program, new murals were commissioned every year. Since 2011, Chris Knudson ’01 has been the mural artist and moved the creation to a digital process. Knudson also designs lighting effects that match the design and theme for each year.

Positive feedback from viewers helps get programs like Christmas with Wartburg on the air.  If your local PBS station doesn’t carry the program, try contacting the program director and make a request. Each station independently selects what they will broadcast. Since public television is driven by viewer input and contributions, if enough interest is expressed, your local station may decide to carry Christmas with Wartburg.

The following videos are available for viewing any time for free. 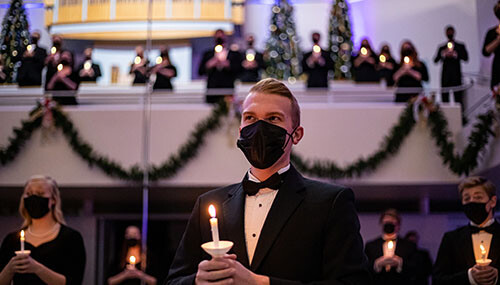 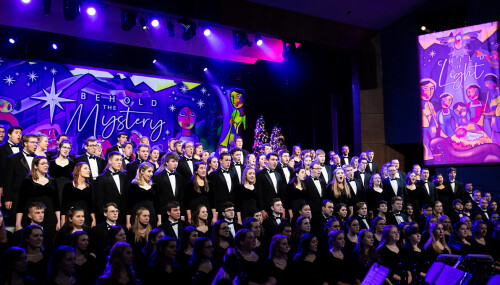 A ONCE IN A LIFETIME EXPERIENCE

Thousands come from all over the U.S. to witness the full splendor of Christmas with Wartburg. This worshipful experience is different each year with new music and visual displays.

CONNECTING WITH MUSIC ON A SPIRITUAL LEVEL. WORTH IT.