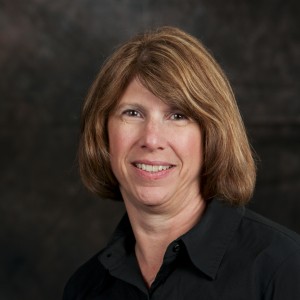 Pam Ohrt, associate professor of journalism and communication at Wartburg College, received the 2019 Jack Shelley Award from the Iowa Broadcast News Association at its April 13 convention in Johnston.

The award is named after the longtime WHO news director who later taught at Iowa State University. The Shelley Award is the highest honor an Iowa broadcast journalist can receive from the IBNA.

Ohrt had a 27-year professional career in radio news, most of it at KOEL radio in Oelwein where she served as assistant news director to the legendary Dick Petrik. She became news director when Petrik retired.

KOEL had a major commitment to news at that time with a news staff of four full-timers and one part-timer. They had a unique operation, making more than 200 daily phone calls in several counties to police departments, sheriff’s offices, city halls and county courthouses to gather stories.

Ohrt brought her professional experience to the classroom during a lengthy teaching career, including the last 13 years at Wartburg College. At Wartburg, she teaches journalism and radio broadcasting and advises KWAR, the student radio station.

“I am so deeply honored to receive the Shelley Award. I had no idea that I had even been nominated, so I was completely shocked and overwhelmed when the award was announced. Jack Shelley was one of my professors in the journalism program at Iowa State University, and his guidance influenced me throughout my career,” Ohrt said. “Dick Petrik, the first Shelley Award winner, was my mentor for more than two decades as I worked in broadcast news at KOEL Radio in Oelwein. My hope is to continue to inspire Wartburg students as I share my passion for radio as adviser of KWAR.”

Tyler French, a former student and one of the award nominators, said Ohrt pushed him to become a better journalist.

“She applies the perfect guiding hand to the students on staff, allowing them to succeed and learn from mistakes, but also making sure things are accomplished and KWAR continues as one of the best college radio stations around,” French said.