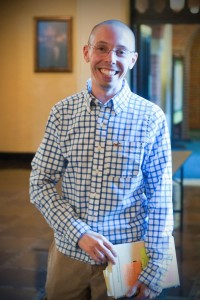 Tom Trenney, minister of music at First-Plymouth Church in Lincoln, Neb., will serve as director of the Wartburg College Choir and Ritterchor through December while the ensembles’ director, Lee Nelson, is on sabbatical.

Trenney has helped other schools, including Doane University in Crete, Neb., in similar interim roles.

“I am so grateful that my church was willing to create the space for me to do this, and that Lee would trust me with this. Anyone who knows him knows how deeply he cares about his students, and it’s an honor to be trusted to tend to that,” Trenney said. “I am humbled by this opportunity.”

Nelson said Trenney was his No. 1 choice for a sabbatical replacement.

“I couldn’t be more excited for the choirs and the entire Wartburg community to have the opportunity to work with Tom,” Nelson said. “He is a consummate musician, a brilliant scholar and a gentle soul that will definitely capture the hearts and minds of the students.”

Trenney’s relationship with the choir dates back to 2014 when he heard them perform at an American Choral Directors Association conference.

“I was taken by the spiritual dimension of their music. They weren’t singing to impress, but to convey a message,” said Trenney, who later reached out to commend Nelson on his choir’s performance. Nelson later asked Trenney to compose a piece for the choir. “Living Water” was premiered during the college’s 2015 Christmas with Wartburg concert.

Trenney has been an integral part of planning the 2018 Christmas with Wartburg program, for which he serves this year as artistic director. He helped determine this year’s theme, and the Wartburg Choir will perform another of Trenney’s pieces during the annual performances Nov. 30 through Dec. 2 in West Des Moines and Waverly.

“I do have a real calling to ministry, and yet I’ve discovered in the times I’ve spent with students, especially in schools like Wartburg, they are invested in a spiritual experience. There is a deep mission and ministry to the music,” Trenney said. “This is a place that requires a vulnerability from the conductors and students, being open to the message of the music that is sung. I think Lee is like me, in that he thinks of music not as the ends, but the means, as a way to deepen these young people and grow them as humans and servant leaders.”
Visit Campus Recruit Me Apply Now