Maddie Poppe mania took over Butler County, Iowa, on May 15, and three Wartburg College journalism and communication students found themselves smack in the middle of the excitement.

Poppe, one of the final three season 16 contestants on the hit ABC show American Idol, was in Clarksville last week for a hometown parade and concert. McKenzie Kielman ’19, who sat on the city’s planning committee, was tasked with hiring the two other production assistants for the American Idol crew. She selected classmate Matt Ohl ’19 and a former high school classmate now at the University of Northern Iowa. Lexi Bodzioch ’19 also had backstage access as one of two official photographers for the Clarksville community.

“When McKenzie asked me if I would be willing to be a PA if Maddie made it to the top three—her mom was involved in the planning for Clarksville—I was totally on board, no questions asked,” Ohl said. “Then about 11 p.m. Sunday night I got the text from McKenzie who said I should be getting emails from the assistant production manager soon. It was so crazy how fast it all happened.”

Kielman and Ohl met Poppe and the American Idol crew in Cedar Rapids Monday afternoon and shuttled them to their hotel. The duo was back in Cedar Rapids before 5 a.m. Tuesday to make sure Poppe arrived at KCRG, the ABC affiliate in Cedar Rapids, in time for a live interview.

“When Maddie got off the plane, she said ‘Hi, McKenzie,’” Kielman said. “We apparently swam together in swim team when we were young, which I hadn’t remember. It was funny to learn she had recognized me from before she was ‘famous.’”

From that moment, Kielman and Ohl spent every minute with the crew until after the concert was over. While Kielman and her mom handled the hospitality piece, Ohl found himself assisting the first camera operator, ensuring he always had charged batteries and fresh media cards. The pair were always within a short distance of Poppe, prepared to catch any interaction between the hometown celebrity and her adoring fans.

During Poppe’s few minutes alone—usually in the limo between events—Ohl said the cameraman had to catch those quiet moments and contemplative feelings that will likely be part of the final cut.

For Ohl, the best part of the day wasn’t getting to meet the wildly popular Poppe—though he admits that was fun, too—it was getting to know the camera operator, a University of Iowa graduate.

“He shared his path to where he is now, and I found it really inspiring, because coming from a Midwest college he was able to find success in a big market,” Ohl said. “In fact, after talking with a lot of the crew, I found out that most of them were originally from L.A. It’s good to see you don’t have to start somewhere big to get there.” 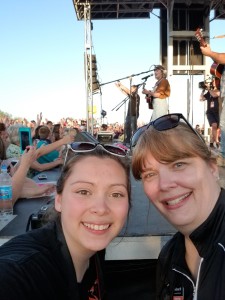 Though Bodzioch never got to meet Poppe, her connection to Kielman and Clarksville meant she was given a coveted American Idol access pass and greater freedoms than local media photographers.

“They weren’t allowing media behind the stage, but we got to go back there and next to the stage. Then Julie (Drewes ’90, the other official photographer) asked if we could get up on the stage to take a picture of the crowd, and they let us. It was crazy seeing it all from there. There were so many people.

“It was just a crazy day and so cool. I didn’t get to meet Maddie, but just being there was an experience I will never forget. It’s cool to see how reality TV works. One of the producers even told us this was the biggest turnout for any of the hometown concerts and parades he’s ever been to.”

Both Ohl and Bodzioch said they will certainly be tuning in Sunday and Monday nights to see how Maddie fares—and how it all comes together for television.

“Maddie is such a genuine sweetheart. She’s under so much pressure, but she handled it like a rock star and is still just ‘Iowa nice.’ It’s going to be so much fun seeing something I helped with on a national scale,” said Ohl, who also helped film This Day Forward, the feature film about Mike ’96 and Jen ’97 Jensen, during May Term in 2017. “I really enjoyed the film experience, but I liked the spontaneity and flexibility of this, too. I’m just so thankful that I had both of these opportunities while at Wartburg.”
Visit Campus Recruit Me Apply Now