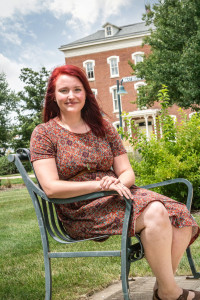 This year, a campus climate survey created by Sami Kopf ’18 and Dr. Brian McQueen, associate professor of sociology, could be used to provide administrators with information that can help shape policies to prevent and respond to sexual assault and misconduct.

Kopf, a psychology and sociology major from Hastings, Minn., studied more than 50 campus climate surveys as part of her undergraduate research project. What she found was that many surveys focused only on overt forms of sexual assault and rape. Questions about unsolicited touching were not included.

“Officials use these surveys to get the statistic that one in every four college-aged females is sexually assaulted, but that doesn’t include a whole chunk of what sexual assault is defined by,” Kopf said.

She presented her research at last year’s Midwest Sociological Society meeting and spent the summer working with McQueen to create a campus climate survey. The college’s Title IX coordinator and team have yet to review the survey to determine if it will be appropriate for use this year.

“I was definitely grateful that they were even interested in hearing what I had to say. I was worried they might not want to do this, because the results from this survey could change those one-in-four results, but Dean (Dan) Kittle (dean of students) even offered funding to allow me to offer incentives to students who complete the survey,” she said. “This just reiterated my confidence that Wartburg is trying to be a progressive school.”

Kopf plans to continue her education, earning an advanced degree in an area related to gender and equality.