Portrait of the Reformation

Iowa City-based artist Diego Lasansky has gifted more than 40 original intaglio prints of Martin Luther to Wartburg College in celebration of the 500th anniversary of the Protestant Reformation.

Two prints will be kept by the college: one displayed on campus, the other at the president’s residence at Greenwood. President Darrel Colson has gifted the rest, along with a copy of Lasansky’s book cataloging his work from 2012 to 2015, to Lutheran colleges and organizations around the world.

“I was honored by Diego’s gift, and I’m delighted to be in a position to share,” Colson said. “Diego’s only request is that the receiving institutions find a home for this print in their permanent collection of art.”

The print depicts Luther as Junker Jörg (translated to Knight George), the persona he adopted during his stay at Wartburg Castle, where he translated the New Testament from Greek into German.

The collaboration began about four years ago when Colson saw one of Lasansky’s Martin Luther drawings. Originally, Colson thought the drawing would be a sufficient Reformation gift, but Lasansky wanted to think bigger.

“I had already started thinking about doing this piece as a print. It made sense to me to send out not a reproduction, but an original,” he said. “It was a win-win for both of us. Wartburg was able to send out an original print as a gift, and I now have a piece of artwork in each of these institutions.”

Each copy of Junker Jörg 1521 was created in Lasansky’s studio over a six-month period. The intaglio printmaking process involves etching and engraving on a flat piece of copper.

“(The print) recalls the central role of the arts in the 16th-century Reformation. From Albrecht Dürer’s promotion of Luther’s reforming insights through the medium of woodcut prints to Luther’s own writing of hymns to teach the people through music, the arts were a key vehicle for the Reformation movement,” Elizabeth Eaton, presiding bishop of the Evangelical Lutheran Church in America, wrote in her letter of thanks to Colson. “Mr. Lasansky’s work represents the continuing contribution of the arts to the reality of the church under the gospel of Jesus Christ, even as his image of Luther in 1521 commemorates a central moment in the Reformation.”

Though Lasansky grew up nonreligious, he took great interest in the importance of religion throughout history and in art.

“The church, for centuries, was the main supporter of the arts. For me, the interest in drawing the pope or someone like Martin Luther is no different than me drawing Albert Einstein or a president,” he said. “They are significant figures in time who have more than just a religious meaning.”

This is not the only Lasansky piece on display on campus. Lasansky’s self-portrait and four prints created by his grandfather, famed Iowa artist Mauricio Lasansky, are installed on the third floor of Vogel Library. The elder Lasansky’s Holocaust-themed series, For An Eye An Eye, used the same copper printmaking process.

The pieces all were donated by William Fruehling, a Waverly native who attended Wartburg for a short time before finishing his degree at the University of Iowa. Fruehling’s father, W.G., was the head of the college’s psychology department, and his mother, Marion, taught business classes and managed the bookstore. 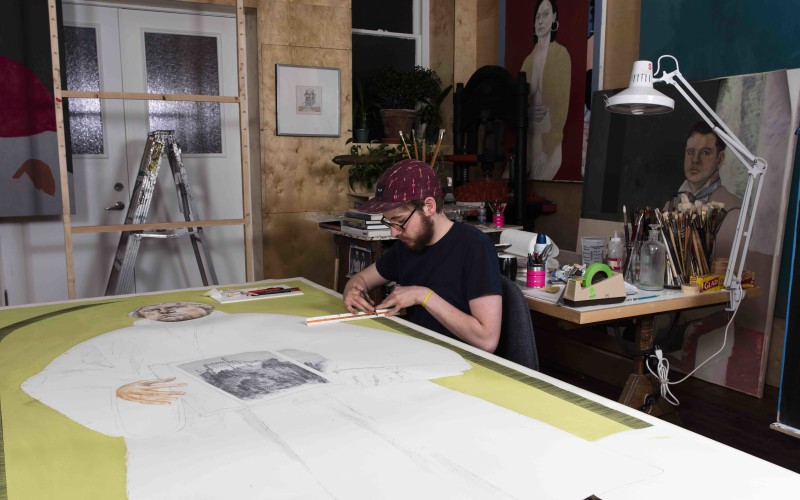