Wartburg taught me to work hard for my goals

Tristan Voelker ’22 has known he wanted to be an optometrist since shadowing his eye doctor in high school. The combination of Wartburg’s pre-optometry track and varied music opportunities offered him the perfect combination for collegiate success and preparation for the next step.

“I came from a pretty small town, and it was important to me to have a smaller school setting so that I would get more personal attention in classes. Once I had my tour at Wartburg, it just felt like home. I was also super impressed with the choir program and the Science Center. I didn’t even know how in-depth and how rigorous our science program was until I had that tour,” Voelker said.

Optometry is a profession concerned with the eyes and related structures as well as vision, visual systems, and vision information processing in humans. Optometrists are trained to prescribe and fit lenses to improve vision and diagnose and treat various eye diseases. Though Voelker’s desire to follow this path never wavered, the reality of college-level courses took some getting used.

“It was a struggle at first to adjust to that college mindset, where you have to study and it’s all your responsibility. But, I knew that the end goal was that I wanted to be an eye doctor. I knew I was going to have to do whatever it took to get there,” Voelker said. 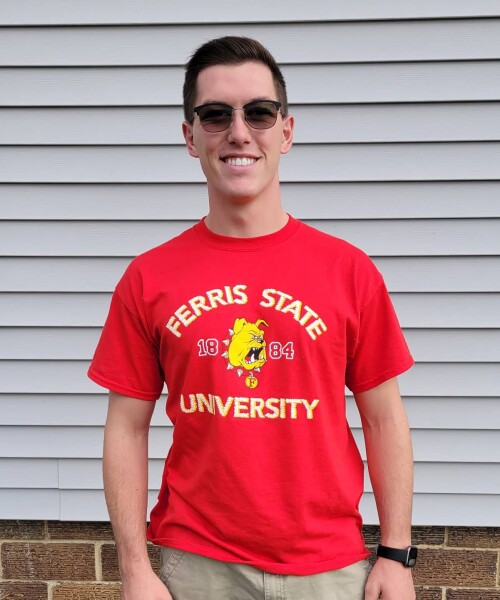 A conversation with a professor from the Michigan College of Optometry at Ferris State University set him on a more focused path.

“I told him about my GPA and my classes, and he looked at me and he goes, ‘Hey, man, I don’t want to be rude, but if you have that GPA by the time that you apply, it’s not going to happen. I need you to do whatever it takes to bump those grades up, get your GPA up, and get ready to take your entrance exams.’ And I remember that shook me to my core, I was like, ‘Wow, maybe I haven’t done enough.’ So junior year, I had to change it up, I had to learn how to re-study. I had to better manage time. I started planning. I got to the point where I was planning out every second of my day.”

“To get ready for the OAT, I had a really big study book that I took with me everywhere, plus a big box of flashcards. I started preparing in April of my junior year and it got to the point where I would study for five or six hours every day at the library. People were calling me crazy. I knew when I heard that I was doing it right. If people don’t think you’re crazy for doing what you’re doing to get to your goals, you’re not working hard enough. I knew I wanted grad school so bad and had to do well on this test. Finally at the end of June, I got to take the test and got my results right away, which was terrifying. As soon as I hit submit, results came back and they turned out really good,” Voelker said.

Then it was time to move on to graduate school applications.

“I got letters of recommendation from my Spanish adviser, which I’m minoring in, and my biology major adviser. They must have written me some pretty good letters, because I sent in applications to the Arizona College of Optometry at Midwestern University, the Southern College of Optometry in Tennessee, and the Michigan College of Optometry at Ferris. I got interviews at all three and was accepted to all three. It was pretty cool to have my pick,” said Voelker. “When I went to my official interview at Michigan, I was telling the same professor about this study process I made. He looked at me and he goes, ‘Dude, you did it.’ And I just kind of fangirled a little bit because it meant so much to me.”

As Voelker prepares for the next chapter of his educational journey, he recalls those who have helped him along the way.

“I’ve had a lot of professors who were willing to push me harder than I wanted to be pushed, and they had a lot of high expectations for me. I felt like I was really prepared for the OAT when it came to studying. I’ve had a really good opportunity to time manage and be involved in extracurriculars and still be able to be a student,” said Voelker.

Reflecting on his process to get to where he is today, Voelker recognizes the importance of setting goals and holding himself accountable.

“You need to have goals for yourself. If you don’t have goals and you have nothing to work toward, then why are you working? And I would say you need to keep those goals in mind. When it gets hard, keep fighting. You know it’s going to be tough. School is not easy. If it was easy, everybody would do it. Do whatever it takes to get to your goals. And that’s easier said than done.”