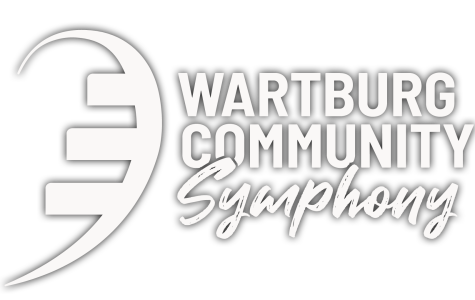 Pillars of Faith, Oct. 30, 7 p.m.
The season’s opening program will celebrate a return to togetherness while welcoming faithful change in preparation for Reformation Day. The concert has something for everyone, from R. Vaughan Williams’ English Folk Song Suite and Haydn’s Horn Concerto No. 1, to Respighi’s Suite in G Major and Mendelssohn’s Symphony No. 5 (“Reformation”). Featured soloists will be Dr. Jordan Redd on horn and Dr. Karen Black on the organ.

Stories Near and Far, Dec. 11, 2 p.m.
Back by popular demand, the Wartburg Community Symphony will once again partner with the Wartburg Opera Workshop and outstanding soloists to present Gian Carlo Menotti’s classic Christmas mini-opera, Amahl and the Night Visitors.  Inspired by the painting The Adoration of the Magi, the production captures the spirit of the Christmas season through the telling of the beloved story of the Three Kings. This family-friendly concert will include interactive elements for children of all ages and feature familiar Christmas classics.

Music Speaks, Feb. 19, 2 p.m.
Our February program centers on works that capture the power of the human spirit. Opening with Edvard Grieg’s popular Peer Gynt Suite I, audiences will be transported on a traveler’s journey, ending their sojourn with the iconic music of In the Hall of the Mountain King. In celebration of Black History Month, the concert will feature works by Black composers William Grant Still and Samuel Coleridge-Taylor. Guest artist Clare Longendyke also will perform Piano Concerto in One Movement by female composer Florence Price.

To Sing and Dance, April 9, 7 p.m.
The 2021-22 season will conclude with selections that celebrate the lyrical and rhythmic nature of music.Listeners are encouraged to sing along to the folk songs within Brahms’ beloved Academic Festival Overture (marking the 125th anniversary of the composer’s death) while dancing to the melodies of Dvorak’s Symphony No. 8 in G Major. In addition, the winners of the Wartburg concerto and composition competitions will debut their works.

Waverly, Iowa has proudly supported a semi-professional symphony orchestra for well over a half-century. Founded in 1952, the Wartburg Community Symphony is comprised of Wartburg College students and community and professional musicians. The Symphony performs orchestral favorites but also presents new and innovative music, garnering recognition for its state, national, and world premieres. All concerts are held in Neumann Auditorium on the Wartburg campus and seating is general admission.

Postponed/Cancelled Concerts
In the event that weather or other situations require a concert to be postponed or cancelled, tickets will be honored at other symphony events. To request a refund, please e-mail wcs@wartburg.edu.

All tickets are general admission to allow our audiences the most flexibility when choosing their seats. Row K premium seats on the main floor will be reserved for association members on a first-come, first-served basis. All complimentary member tickets will be available at will call prior to the first concert. Members may also pick up tickets from the ticket office in Saemann Student Center. Call 319-352-8691 for office hours. If you would like a membership form or have questions, email wcs@wartburg.edu, call 319-352-8642.

We are excited for a great season ahead! If you are a Wartburg student or new community member who is interested in performing with the WCS, auditions will be held at the college on Wednesday, Sept. 1, 7-9 p.m. (Winds/Brass/Percussion) and Friday, Sept. 3, 7-9 p.m. (Strings). You can email rebecca.nederhiser@wartburg.edu for more information. To schedule an audition time, please email WCS operations manager Sally Malcolm at sally.malcolm@wartburg.edu. A link to the audition materials is provided below:

History of the Symphony

The passion that marks the Wartburg Community Symphony flows from its conductors. Those eight talented musicians have molded a music organization whose future is bright.

The Wartburg Community Symphony began, because a new Wartburg professor, 38-year-old Ernest Hagen, wanted a symphony to conduct. Passionately. After all, he had studied conducting in Berlin under the conductor of the Vienna Philharmonic Orchestra. He directed a 60-man army chorus and played in the army band, whose performances were recorded and broadcast. His Sumner (Iowa) High School vocal and instrumental groups earned first division ratings at state contests.

In the Fall of 1952, having completed a master’s degree at the University  of Iowa, Hagen joined the Wartburg College faculty and brought his young family to Waverly. Soon after he arrived, the “finest thing that has ever happened to Wartburg’s music department” was announced—accreditation by the National Association of Schools of Music. However, there was no orchestra. So Hagen began recruiting players. “He recruited tirelessly,” said Carla Larson, long-time symphony supporter and wife of tenor Dr. C. Robert Larson, who joined the faculty the same year as Hagen. “He fervently visited area towns and communities and got together quite a respectable group.

”The symphony appeared first as a chamber orchestra in the 1952 Christmas at Wartburg performance. Accepted into the American Symphony Orchestra League, the orchestra played its first concert in Knights Gym Sunday evening, May 24, 1953. Musicians—16 college students and 38 community members—wore “a glittering array of formals and tuxedos.” They came from Minnesota, North Dakota, Wisconsin, and 14 Iowa communities to play a program that included Bach, Grieg, and Schubert. The Waverly Chamber of Commerce presented a certificate of merit to the orchestra during intermission, and more than 500 people applauded enthusiastically.

Hagen moved on in 1959, becoming director of the Casper (Wyoming) Civic Symphony, organizing the Casper Youth Symphony and founding the Jackson Hole Fine Arts Festival (now the Grand Teton Music Festival) and several festival orchestras. Tragedy struck in 1973. Hagen lost his eyesight as he was composing an opera based on the novel “Giants in the Earth.” With the aid of special magnification devices, Hagen orchestrated the opera, which has been performed in concert version but awaits a fully-staged performance. Hagen died in 2000.

Dr. Robert E. Lee (1959-64) smiled when he recalled taking the podium for the first time. The program was ambitious, perhaps too ambitious, with a Beethoven concerto, a Shostakovich prelude, and a Bizet symphony. Lee didn’t know it was one of the first complete symphonies the orchestra had performed. During the second movement, he called out rehearsal letters to get everyone on the same page.“…I didn’t know the orchestral repertoire that well,” said Lee, whose background was band. “We made it through that first concert and continued to build the orchestra and play some nice things.”Before Lee left the podium, he arranged for Hagen to return to conduct a tenth anniversary concert of Grieg, Haydn, Mozart, and Vivaldi, on February 2, 1964.

Dr. Franklin Williams (1965-79, 82-84) faced conducting challenges with insight.“My first shock was that we barely had enough strings to make a quartet at rehearsal. But musicians would come from all over to play on Sunday, so we’d have a rehearsal before we played the concert. I always said it was coronary time for me.”His first concert featured Rossini; the second, Shostakovich in a strenuous, sometimes raucous piece.“I kinda’ went off the deep end. With small strings you can’t do the large romantic pieces because you can’t balance the winds and strings. I love Beethoven, Mozart, and Bach, but I wanted to do something different.”

Lathon Jernigan (1979-82, 85-87) drove from the University of Northern Iowa in Cedar Falls to conduct the orchestra. He led the musicians through challenging and rare pieces, including Bach’s “Concerto for Four Harpsichords.”“It was tricky finding four harpsichordists,” Jernigan said, “but we had two from Wartburg and two from the University of Northern Iowa. The community really seemed to appreciate those programs.”

Dr. Janice Wade (1987-2011) founded and conducted the Des Moines Community Orchestra and served as concertmaster of the Bijou Players, a silent-film touring group before arriving in Waverly. She created memorable Wartburg Community Symphony concerts using the silent film of “Phantom of the Opera” and films starring Charlie Chaplin and Rudolph Valentino. Another concert performed Holst’s “The Planets” to a 3D video of NASA planet photos. Using professional and semiprofessional musicians, Wade strengthened the quality of the Wartburg Community Symphony and arranged two cruise bookings.

Dr. Daniel Kaplunas (2011-2015) formed the Wartburg Chamber Orchestra as an avenue for students to perform and grow as musicians. He inspired students as musicians and composers. Audience numbers increased as Kaplunas drew local artists and music groups into concert programs. At his suggestion, the board established a Wartburg Community Association Endowment Fund to ensure the symphony’s future.

Dr. Jacob Tews (2015-2019) increased exposure for the chamber orchestra with a new name, “Kammerstreicher” (German for chamber orchestra). He partnered the Kammerstreicher with the Castle Singers to tour both domestically and abroad. The symphony endowment quadrupled in size during Tews’ tenure. His concert programs often featured music by modern composers and his own compositions.

Dr. Rebecca Nederhiser (2021-present) focuses on collaborative concerts featuring nationally known artists. Under her impressive leadership the symphony and Kammerstreicher doubled in size. She created the St. George String Quartet, which provides scholarships for the four top student string players and commissioned several works for the orchestra. The symphony will celebrate its 70th season under her baton.

The Wartburg Community Symphony Association’s mission has always been to provide symphonic music to the greater Waverly community and professional experience for music students. Association membership is open to all dues-paying individuals. The association’s board of directors consists of college and community members. Although the conductor/music director is responsible for musicians and music goals, directors are involved in things such as budget, development, event management, fundraising, membership, and publicity. This governance structure distinguishes the Wartburg Community Symphony from the college’s other music organizations. 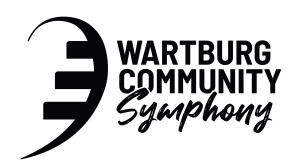 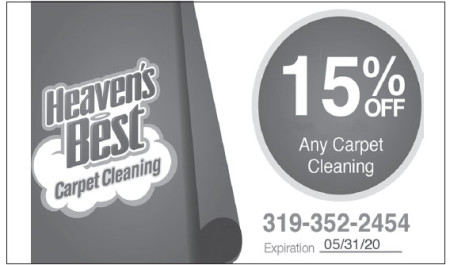 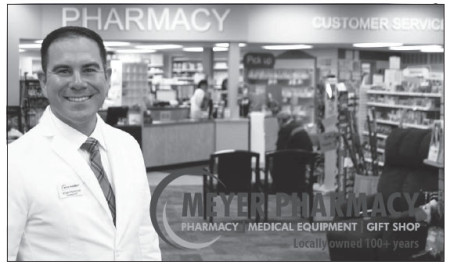 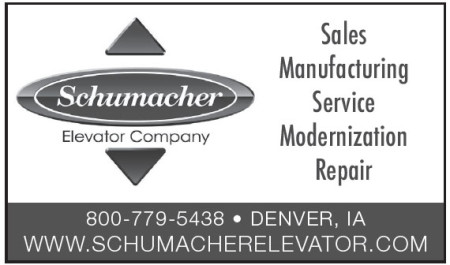 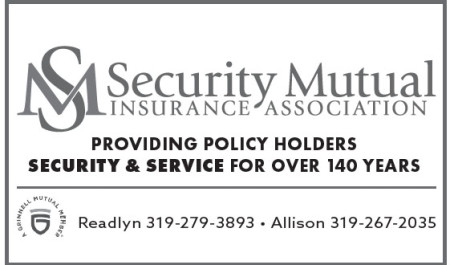 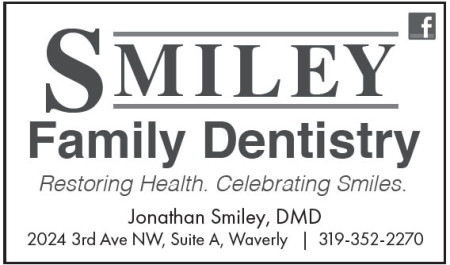 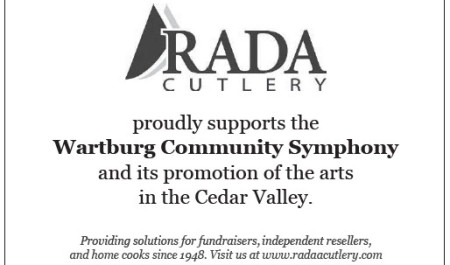 Wartburg students have the opportunity to play alongside professional musicians to create truly magical musical moments.

PROFESSIONAL MENTORSHIPS. WORTH IT.