Dr. Montgomery earned a B.A. in Economics and Business from Kalamazoo College, an M.A. in Hispanic Literature, and a Ph.D. in Portuguese Literature with a comparative emphasis on Spanish and Portuguese literatures from Indiana University. He speaks Spanish and Portuguese, and has studied in or traveled to many Spanish- and Portuguese-speaking countries. He regularly leads a May Term course to Costa Rica for Spanish majors/minors at Wartburg, and has led Spanish immersion courses to Wartburg West in Denver, Colorado. Dr. Montgomery also teaches a service-learning course, SP315 Latinos in the United States, where students work alongside Latinos in the local community, and he currently serves as the Harry & Polly Slife Chair in the Humanities. His research interests include U.S. Latinx identity in educational contexts and Luso-Hispanic comparative literary studies. 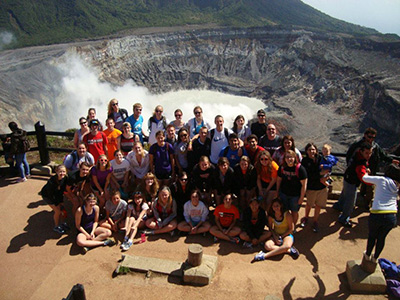