Wartburg led me to my vocation

Wartburg College often presents the opportunity for students to discover themselves and the passions they care most about. For Katie Linthicum ’19 it was easy to find her passions at Wartburg through her experiences in the Department of Religion & Philosophy.

Linthicum was unsure of her major during her first term on campus, but it became clear during Literature of the Old & New Testament, an introductory religion course. Linthicum attributes the roundtable discussions often held in class, along with the learning curve of new reading and writing styles, as one of the main reasons she fell in love with the department.

“Throughout the semester I am almost positive everyone cried in class at least once. Not because they were sad or mad, but because they were being vulnerable and that never could have happened without the intentionality of the department faculty members,” Linthicum said.

She credits this vulnerability as a main reason why the community within the department grew so fast and how she got so close with the professors and students of the department. The support shown by members of the Department of Religion & Philosophy helped to nurture and further Linthicum’s understanding of new concepts through her time at Wartburg. 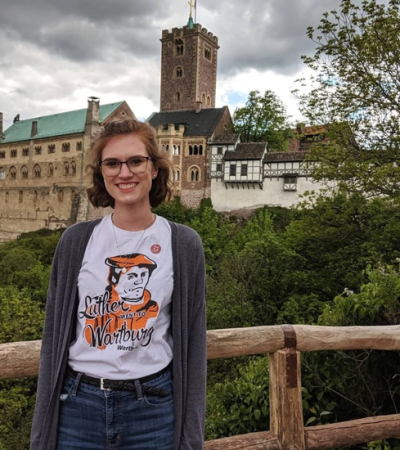 Her time spent studying religion was also paired with plenty of good memories with peers and professors in “The Burrow,” the collaborative area outside of the religion offices in Grossmann Hall. Linthicum recalls times of laughter and studying.

Linthicum, who also earned a degree in social work, said she was challenged to constantly think critically and develop a wider scope of the world and those around her.

With the support of her faculty mentors, she applied for and was accepted into Young Adults in Global Mission, a ministry of the Evangelical Lutheran Church in America, for a year of service in Australia.

“The professors in the department have an amazing ability of encouraging their students. Not only are they there to talk through all of life’s concerns when you need it, but they also make sure to point out your strengths and gifts without you even asking,” she said.