The business department gave me the best opportunities

WHY DID YOU CHOOSE WARTBURG: I chose Wartburg for the music department. I was interested in music therapy, and there weren’t a lot of schools around me that offered that. I liked the small campus feel and how when I came on tours everyone was so friendly. It was such a welcoming environment. I’m really happy that I found Wartburg through music and then was able to transition into business.

WHY DID YOU MAJOR IN BUSINESS ADMINISTRATION:I wasn’t exactly sure what I wanted to do. I was interested in music, but I had a lot of interests outside of music as well. The business department gave me the best opportunities for going forward outside of college. I knew that with the business degree I could go wherever I wanted with that, especially with marketing and public relations.

HOW DID YOU GET INVOLVED WITH THE ST. ELIZABETH CHORALE: I wanted to keep singing after high school so joining a choir at Wartburg was a no-brainer. I joined the choir my freshman year and have been in it ever since. I saw them tabling at the Involvement Fair, and I knew from then that I wanted to get involved. I had never sang in a soprano/alto choir, so I really enjoyed getting to sing in that and participate. 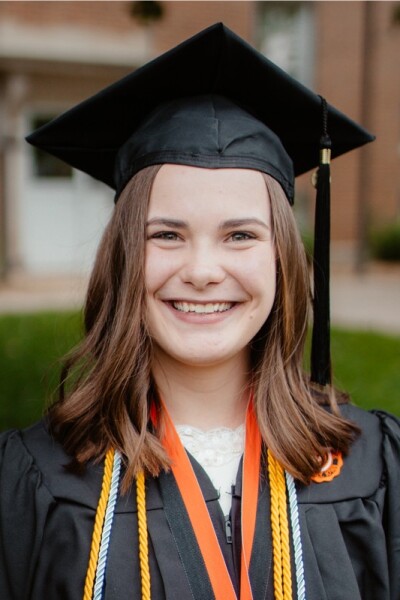 WHAT RESPONSIBILITIES COME WITH BEING THE ENSEMBLE PRESIDENT: Being president has a lot of organizational details, which includes giving announcements every rehearsal, making sure people know when and where we’re meeting, if there are any performances coming up, and that sort of thing. As president, I’m also open to hear anyone that may have concerns or wants someone to talk to. I have told the people in the choir that they can come to me with anything that they need. I also lead council meetings for the choir’s executive team. As a team, we address questions and concerns that people have and try to make the choir a fun environment for everyone involved.

WHAT WAS YOUR FAVORITE WARTBURG COURSE: The most memorable course I took was my Inquiry Studies class which was the History of Martial Arts. It’s taught by one of the accounting professors who has a black belt. We would go out on the campus lawn and do Tai Chi. We learned about different martial arts moves and talked about different kinds of martial arts which was interesting to me.

HOW HAS WARTBURG HELPED YOU SUCCEED: I don’t think I would have been able to graduate in three years at any other college and taken the path that I did. I’m really appreciative of my advisers and the rest of the faculty in the business department and everyone who helped me figure out which classes to take and when so that everything would fit in my schedule. I’m thankful that they helped me go along that track and figure everything out with changing majors and adding everything that I wanted to add, such as my minor and concentrations.

WHAT ADVICE DO YOU HAVE FOR PROSPECTIVE STUDENTS: It can be hard work, but it is going to be one of those degrees that you can do a lot with and whatever direction you would like to take it, we have professors who are knowledgeable about a lot of those professions, whether that’s entrepreneurship, management, marketing, or whatever it may be. At Wartburg, you’re going to be able to get a very well-rounded education that you can then take and mold into whatever you would like to do after college.

WHY IS WARTBURG WORTH IT: The people. The people have made Wartburg worth it. It was the first thing I noticed when I toured here and it’s going to be the thing I remember long after I graduate.