I was an athlete, researcher, volunteer and still graduated in three years

When he came to Wartburg, Brandon Bloebaum took every opportunity to get involved. Over the course of only three years, he has completed research and volunteered all while playing soccer for the Knights and completing a rigorous program in actuarial science — a feat he attributes to being able to depend on his advisers and other faculty.

“Whenever I had a question, he would be there to answer and help me out. I am graduating in three years, and I have been able to be a part of the Scholars Program, do research, and all this stuff. That is something I would not necessarily get at a different school. At Wartburg, I have been able to work with people, doing what I need to do and doing what I want to do as well.”

Bloebaum has completed various research projects while on campus. As a part of the Scholars Program, students convert two 200-level or above courses to Scholars Contract courses by completing a project in addition to normal coursework. Bloebaum decided to do his contract course with his probability and statistics class.

Another important piece of the Scholars Program is the volunteering aspect, where students complete term-based service projects to eventually include in a service portfolio. For this element, Bloebaum worked in an IT help team during his freshman year then assisted with the Waterloo Food Bank later on. Both experiences proved rewarding. 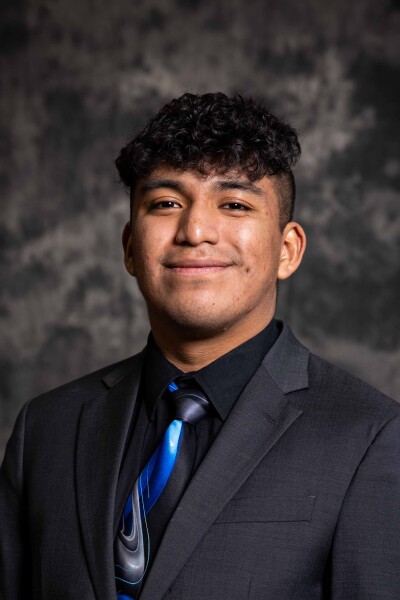 “Interacting with people, being able to talk to them about their experiences and help them was really beneficial, especially during my freshman year.”

In addition to his Scholars Program research, Bloebaum found other ways to complete research that set him apart in his field. The college’s IINspire program, which is part of a group of colleges that work together to broaden the participation of underrepresented minorities in science, technology, engineering, and mathematics (STEM) education the Midwest, gave him the chance to try for other opportunities that he might not have had otherwise. One such opportunity was a research project with Dr. Mariah Birgen during his freshman year.

“I learned a completely new programming language, and I was able to later work with a team on building a dashboard through the programming language that we used to display COVID-19 data. At the end of the summer, we presented it at a research conference. It was a really good experience, learning about the research process and what it really takes to be a successful researcher were some of my biggest takeaways from that experience,” Bloebaum said.

After graduation, Bloebaum will complete an actuarial science internship with Liberty Mutual then continue on to Carnegie Mellon University in Pittsburgh to pursue a master’s degree in computational finance. When he looks back, Bloebaum will always remember the sense of community at Wartburg.

“The people here really care. That is what is the game changer for me. Everyone I have met — professors, other students and peers — everyone really puts their full effort into making it a good experience for everyone involved. That is really important, and it has changed my life and the lives of other students I know,” Bloebaum said.