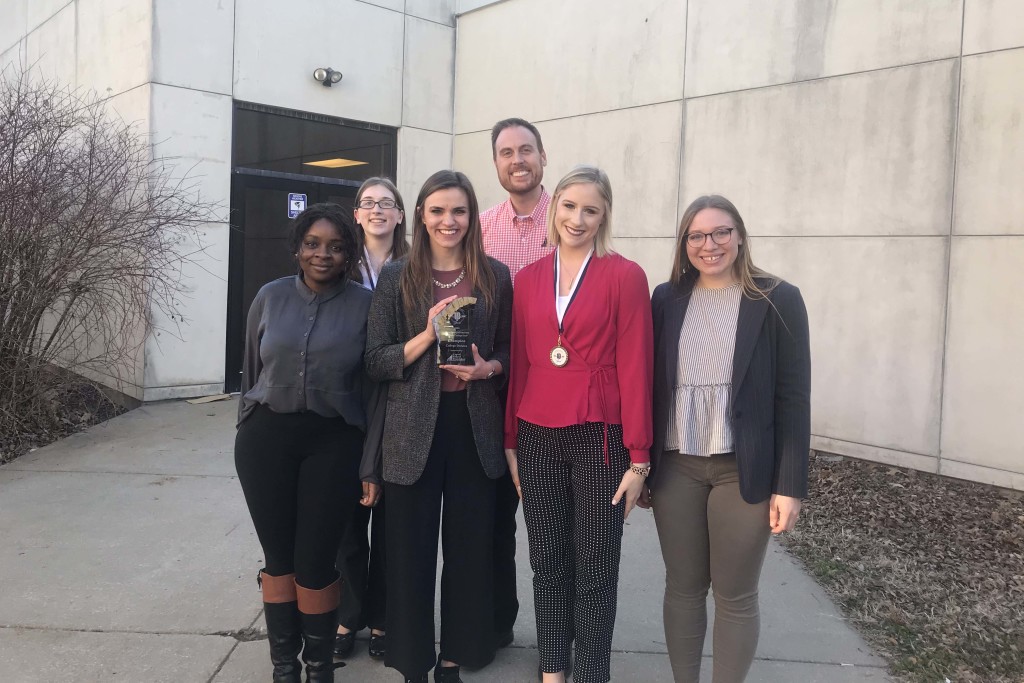 Senior Jenna Brannaman; juniors Barbara Tigere, Gene Anne Berst and Sarah Martin; and freshman Jenna Smuszkiewicz competed against teams from 10 other colleges on March 5-6 to win the title. The LCE provides high school and college students the opportunity to address a variety of problems and situations where the outcome of the simulation is dependent on the leadership decisions made throughout the course of the competition.

Brannaman said the team was first alerted of the simulated situation, a mental illness incident at a local correctional facility, when a folder marked “URGENT” was slipped under their door at 6 a.m. In the fictional scenario, a correctional officer had attempted to de-escalate the situation, but a physical altercation had occurred. Each team member was given a role to fill throughout the competition and some details about their position.

Throughout the day, the team was observed by a mostly silent judge and was visited by several other participants playing the roles of concerned community members and local media, among other things.

“The big turning point for us was when we had time for lunch and a reflection,” Brannaman said. “We were able to talk openly about the challenges we were facing and what we needed from our teammates to continue to work through the issue.”

Lunch ended with a message from the “governor,” who told the teams that the state was cutting its funding for mental health services in correctional facilities. The team had 90 minutes to deliver a complete report on how they would address the situation.

“We felt good about our recommendations, but at the end of the day, we were really just there for the learning opportunity. We didn’t think we were going to win,” she said. “I think we all froze when they called Wartburg as the champion. We gave it our all through the entire process, and in the end, we won, but more importantly, we learned a lot.”

Michael Gleason, Wartburg’s Irving R. Burling Distinguished Professor in Leadership, said he was very proud of how the team worked together, despite never having competed in an event like this before.

“I heard multiple times throughout the day that the students were excited to learn about the process and ready to tackle whatever was thrown their way,” he said. “It’s even more exciting when their performance is acknowledged. To go for the first time and to do so well only reinforces how talented they truly are.”

All five students are working toward a minor in leadership. The leadership minor at Wartburg College is designed to help students demonstrate and reflect critically upon the Wartburg definition of leadership, “taking responsibility for our communities, and making them better through public action” and apply it to their own experiences and situations.
Visit Campus Recruit Me Apply Now