Demonstration of Unity was eye-opener for the soccer team

Bo McMahon ’22 was recruited to play football at Wartburg College, but after just one season he realized the soccer field was where he belonged. That decision led him to meeting a group of lifelong friends and people that he now calls his family.

“We know that we can always get on one another in a positive way, yet at the same time have trust in each other to do their role on the field against opponents,” said McMahon, a business administration and economics major from Denver, Iowa.

During the 2020-21 academic year, the men’s soccer team took a leading role in the push for inclusivity on campus and social justice in the community.

“We had multiple meetings about our personal experiences with social justice, and then we took it a step further and said, ‘What are we going to do next?’,” McMahon said.

In the fall the team hosted a Demonstration of Unity to speak out against racial injustice.

“The Demonstration of Unity was an eye-opener for our team, other student-athletes and the campus. Some people have never witnessed racism before, so hearing and learning from others will help educate people to understand that not everyone is treated equal,” McMahon said.

In the classroom, McMahon is following in his parents’ footsteps. 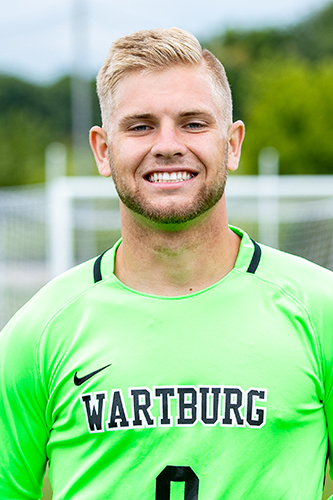 “Both of my parents were business majors, and after taking my first economics course with Dr. (Nana) Quaicoe, I enjoyed economics as well and decided to double major,” he said, adding that Quaicoe and Professor Kim Folkers have been key to his academic success at Wartburg. “I know I can always get help for every class. If I have trouble understanding a certain topic, I can always reach out to a classmate or a professor.”

After graduation, he hopes to become a compensation and benefits specialist.