In May 2017, Jeannie Dees ’19 was one of several Wartburg College students who traveled to the British Isles as part of a May Term class studying the historical roots of math and physics. While visiting places like Oxford, Cambridge, Scotland, Edenborough, and Wells, she wrote museum reviews, daily journal logs, and a research paper on George Boole, the person responsible for a foundation of proofs today.

Earlier this year, Dees, a math major from Chicago, presented a poster she created about the experience at the Iowa, Illinois, Nebraska STEM Partnership for Innovation in Research and Education (IINSPIRE) Louis Stokes Alliance for Minority Participation (LSAMP) annual conference in Coralville. Her poster won third place in the experiential learning category.

The IINSPIRE Alliance includes 16 state, private, and community colleges in Iowa, Illinois, and Nebraska who work together to broaden the participation of underrepresented minorities in science, technology, engineering, and mathematics education in the Midwest. The IINSPIRE project is part of the LSAMP program funded by the National Science Foundation.

JulieAnna Olague ’18, a biology and Spanish major from Avondale, Ariz., and Diane Delgado ’18, a neuroscience major from Phoenix, also presented their research at the conference.

“I am a minority student in a STEM field that is predominantly white, but being around people who looked like me and being able to see other people of color succeed was great,” Dees said. 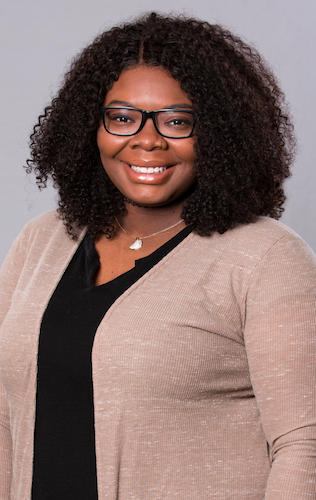 At the conference, students had the opportunity to listen to speakers and watch each other’s presentations. Some of Dees’ favorite topics were microaggressions and how to detect autism within the first few days of a baby’s life.

“The LSAMP conference was really empowering. One thing I learned was that it’s not impossible to be successful in a STEM major as a minority. I really struggle with that, and sometimes going to class can be very intimidating because I might be the only person who is black or female there. Knowing that others also go through that and seeing them continue to do good things in STEM gives me hope.”

Before coming to Wartburg, Dees never envisioned herself attending college. Instead, she planned on furthering her Marine Corps ROTC experience by joining the military. She still hopes to join the Navy after graduation and will follow up that experience with graduate school.

“Wartburg creates a safe learning environment and a safe haven for everyone. I know I can go to the Science Center and get support in one way and go to the student center and get support in another way. There have been hiccups, but people are willing to listen and want to make Wartburg as comfortable as possible and a better learning environment for everybody.”

In the future, Dees hopes to create a scholarship fund for minority students.

“I’m at Wartburg on a McCaskey scholarship. Without that I probably wouldn’t have been able to come to Wartburg. I want to pay it forward so someone else can have the good experience that I’m having here.”