A competitor on and off the field

Hunter Baldus ’18 is used to excelling on the football field. In 2016 he played in 10 games, racking up 33 tackles, two sacks, and one interception.

This summer he showed he could outshine the competition in an office setting, too. While interning at Northwestern Mutual in Cedar Rapids, the business administration major was ranked 129th out of more than 4,000 interns companywide, was invited to a Summer Camp offered only to the top 100 interns in the Central and Western regions, and was invited to the Next Level Development Program offered to Power of 10 achievers, a production-based accomplishment only reached by the top 15 percent of interns.

“It surprised me that I did that well,” Baldus said. “It was crazy how hard I worked at times, but other times I knew that I could work 10 times harder, which gives me confidence moving forward.”

In the summers following his freshman and sophomore years, Baldus split his time between classes and jobs, with a focus on earning money. This summer, with the support of his parents, he looked for an internship opportunity that would provide him with the key interpersonal skills he knew he would need post-graduation. 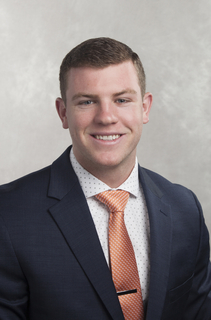 “I thought the best thing was to meet new people and really communicate with them, not just sit in the back and fill coffee,” he said.

At Northwestern Mutual interns are expected to perform and must be licensed in life, health, and disability insurance before they can begin.

“It was difficult trying to get that all straightened out during May Term when I was taking classes and preparing to travel with the football team to Italy,” he said. “It was probably one of the harder tests I’ve taken, and I studied a lot.”

When he began at Northwestern, his co-workers told him the job was like drinking from a fire hose because he needed to jump right in to get the hang of it. His days consisted of calling and meeting with potential clients.

“I talked with people about their financial goals, investments, 401Ks, and other things, like life insurance. I was my own agent.”

Working in the insurance industry, Baldus also learned a lot about the importance of building a network. A friend referred him for the position. His family and friends — and their family and friends — were his first potential clients. His internship supervisor was the older brother of a fellow Knight.

“I can better understand how the relationships I’ve developed at Wartburg, like the ones with my teammates and professors, have opened up a number of possibilities for me and probably will open up ones I don’t even realize yet,” he said.

Though he still isn’t certain what he wants to do after graduation, he knows his experience at Northwestern Mutual has better prepared him for whatever that might be.

“They say it’s one of the top 10 internships in the nation for business, and I can definitely see why now. I know that I can go somewhere from this experience.”