En Route to Her Dreams

“I remember sitting in a macroeconomics class with 250 students. I knew I wasn’t going to enjoy those kinds of classes,” said Davis, who started as a financial management major.

Her first year at Wartburg, Ashley—now a communication arts major—produced, anchored, and reported for Wartburg Television; worked on the KWAR radio and Trumpet newspaper staffs; and joined several student organizations.

In 2013, Ashley was selected for the inaugural Mark Pearson internship, working with Iowa Public Television’s Market to Market as an associate producer, an experience she called “life-changing.” She’s also been a reporting intern at KCRG-TV in Cedar Rapids, KWWL-TV in Waterloo, and worked as a freelance producer for IPTV during the Iowa State Fair.

As a fourth-year student, Ashley works part-time as a photojournalist and editor at KWWL, in addition to balancing a full load of classes, another part-time job, working with Knight Vision (the college’s online sports network), and anchoring, producing, and reporting with Wartburg Television.

“Being able to be involved in so much as a student is one of the many things that makes Wartburg worth it,” Ashley said. “I’m still a student, and I’ve already had experiences that most don’t have until they graduate. I am en route to my dreams because of Wartburg College.” 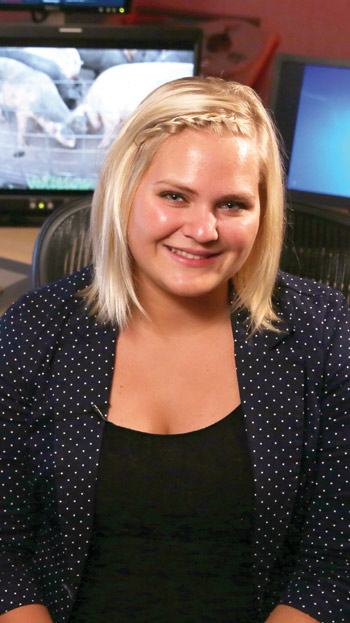