Wartburg West helped me grow as a person

WHY DID YOU CHOOSE TO GO TO WARTBURG WEST: For me, it was a cool opportunity not only for internship credit, which I needed for my peace and justice studies major, but also because it’s a major city. We’re kind of removed from major metropolitan areas in Waverly. I also knew I had really good opportunities and that it would let me grow as a person. I decided to go out and it was an awesome experience, and I really did grow. I had to learn how to adult, which was interesting – just the day-to-day activities of being an adult, learning to work, and having an example of how real-world, adult careers work.

WHERE DID YOU DO YOUR WARTBURG WEST INTERNSHIP: I was at the Interfaith Alliance of Colorado working on its legislative and economic activities teams. I worked on two different statewide ballot initiatives that ended up passing in November. It really showed me that what I learned in the classroom about political strategy and economic hardship and how it could apply to a real-world situation and in the workplace. 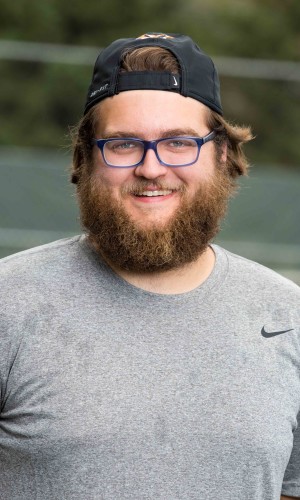 DID THAT EXPERIENCE IMPACT YOUR PLANS AFTER GRADUATION: A little. I wasn’t leaning toward nonprofit work when I went out there, as I was looking more toward legislative or political campaign work. Now I’m more open to working in the nonprofit-sphere, especially if I can use my knowledge in a politically active nonprofit organization. I love nonprofit work, and I found that it’s really rewarding. It’s something we don’t learn a lot about prior to experiencing it, and it’s very different than I thought it was. Not only has it changed my viewpoint on where I want to be, but also it provided me valuable feedback to give to my professors and people on campus on what would be cool things to add into curriculum. Political science is really political nonprofit work and that’s a connection a lot of people don’t make.

WHAT ARE YOUR PLANS AFTER GRADUATION: I’m looking at moving back to Rochester and working for a few years before applying to graduate school programs, whether that’s public policy or public administration. I’m not really sure what kind of work I want to do, but campaign work is up there with nonprofit work.

HOW HAS WARTBURG PREPARED YOU FOR LIFE AFTER GRADUATION: Wartburg has opened doors to experiences I wouldn’t have had anywhere else. One of my favorite internships I’ve had, other than the Interfaith Alliance of Colorado, was as an intern for Congressman Tim Walz of Minnesota. It wasn’t until the end of that summer that I realized that Wartburg was instrumental in helping me get that internship without me even knowing it. I put that I went to Wartburg on my application and the congressional staffer who hired me grew up in Iowa and went to music camps at Wartburg and realized the association. That was what made him pull my application from the entire pool. It opened a door to a congressional internship and I had no idea.

WHAT OTHER EXPERIENCES HAVE YOU HAD AT WARTBURG: I traveled abroad in May Term of my sophomore year to Port au Prince, Haiti, with Dr. Brian McQueen’s global communities class. We spent about eight days working with a nonprofit called Partners in Development. They do various activities and run programs for the local population, but they really focus on providing housing. There was a huge earthquake in Haiti and since then the infrastructure hasn’t recovered, so Partners in Development identifies specific people within its neighborhood who are still experiencing homelessness. They partner with them to build houses and then give those houses to families at a really low monthly payment compared to what other families pay. Now they have child sponsorship programs that allow kids to go to school, be in nutrition programs, and have access to clothes and other services. Through that, their parents are put into an economic business-building program that teaches them to create and run their own businesses to create a more stable monthly income. I had never been outside the U.S. before, and it was really interesting to learn that the United States played a large part in Haitian history and that they’re just over 90 miles away from us and are experiencing this huge poverty. It had a huge change on not only my ideology, but my value system. It changed my outlook. I’m going back this May Term with the same class but as a leader.

WHAT IS YOUR FAVORITE WARTBURG MEMORY: I think it is Haiti. It was a trip that taught me a lot and opened my eyes to how sheltered we can be within our own country and communities. I think what we associate with poverty is nowhere near what other people experience outside the United States. It was something that I thoroughly enjoyed. The people we met and connections we built is something I’m always going to remember. Now I have this love for a country I barely knew two years ago.

WHY IS WARTBURG WORTH IT: For me, it’s been worth it because it’s given me opportunities I never dreamed I would have before coming to college. When I chose a college, I thought I was choosing professors and classrooms. With Wartburg, I ended up choosing experiences and memories that I had no fathom of before.