From basketball court to court of law

The email came on a Thursday, nearly two weeks early.

Bobbie Burrows ’16, an engineering science major, was visiting her grandmother when her phone sounded the familiar ding signaling a new email. She wasn’t expecting to see the subject line: Your LSAT Score.

Nerves set on edge, she clicked the message and waited.

“My grandparents have terrible Internet, and my email wouldn’t load so I had to run to my other grandma’s to get on her computer. When I saw that I got a 172, I started tearing up,” she said. “I called my mom to tell her. My grandma didn’t know what was going on. She kept asking if it was a good score.”

Burrows was banking on a good score. She regularly earned 165s on her practice tests. She’d laid out a plan for her “safe” schools, including the University of Iowa, where the median score for admits is 161. She’d considered her “reach” schools, including Duke and Michigan, where the average student scores a 168. Harvard, where students usually need a 172 to be considered, was nothing more than a dream.

“Scoring in the 99th percentile on the LSAT is no easy task, but Bobbie is a great representative of what Wartburg has to offer. She is receiving top-notch instruction in the sciences and engineering and benefitting from a strong liberal arts education,” Thalacker said.

Now Burrows, who is considering a career in patent law, must narrow her options to just one. But, finding time to visit each of the schools has proven problematic for the college’s starting shooting guard. The team earned a long-shot, at-large bid to the NCAA tournament and spent Winter Break – when Burrows planned to visit law schools – practicing. The Cinderella team’s run finally ended with a loss to Tufts College in the Final Four.

“That’s one of the things I love about Wartburg, though. I can study engineering and still play a sport,” said Burrows, who is used to operating under pressure. She took the LSAT the Saturday of Homecoming weekend – and she was on the Homecoming Court.

“It was definitely a busy week. I had to study and had all the court stuff,” she said. “I missed the parade for the test but made it back in time for the football game.”

Burrows credits her school work and her advisers, Thalacker, Dr. Dan Black, and Dr. LeAnn Faidley for her success.

“When I talked to Dr. Faidley about going to law school, she was the one to ask if I’d ever considered patent law. I’d never even considered that as an option,” Burrows said. “Karen helped me through the LSAT process and worked with me whenever I had any questions. And the fact that she got just as excited about my score was pretty awesome.” 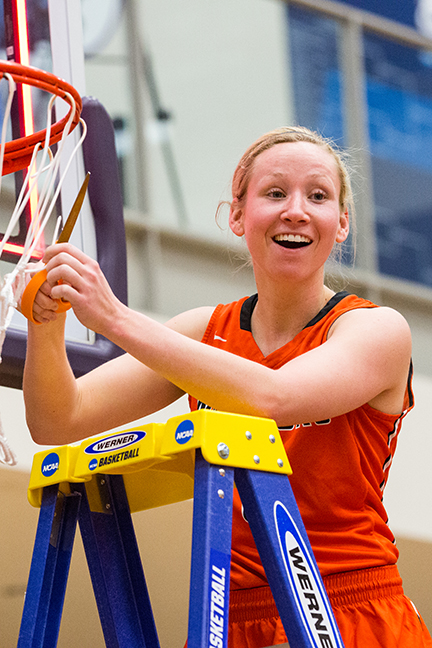