Wartburg’s President Colson to retire at end of academic year

Darrel Colson, the 17th president of Wartburg College, announced today that he will retire at the end of the academic year, bringing to close a 13-year tenure that started on July 1, 2009.

“When we consider only the satisfaction that we derive from the work, I’d likely never retire; and yet, we learned many years ago from a more experienced presidential couple that one of the most important, and yet difficult, decisions a president must make is when to step aside and pass the baton to another,” said Colson, who along with his wife, Christy, will return to Louisiana following his retirement. “Loving a place as much as we love Wartburg makes leaving difficult.”

Colson said leaving now, as the college prepares to finalize its new strategic plan and the fundraising for initiatives that are brought to the forefront by the plan, will serve the college well as it looks toward the future. 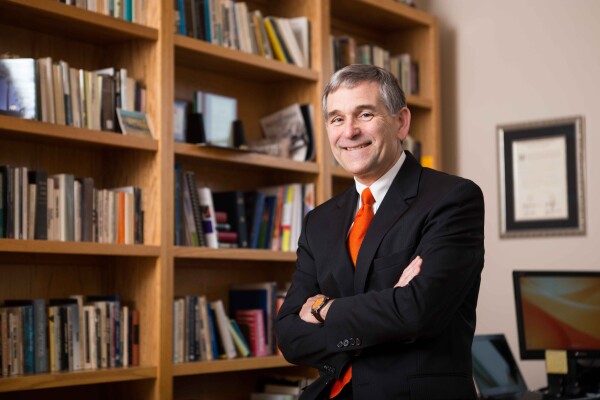 “What a propitious time for a new president to join our community and to pursue those ends,” he said. “The college’s future is as bright now as we’ve ever seen it.”

During his tenure at the college, the Board of Regents adopted and pursued “Living our Learning, Claiming our Calling, Transforming Tomorrow,” the strategic plan that ended in 2020. In support of the strategic plan, the college community generously supported the “Transforming Tomorrow” comprehensive campaign, which raised more than $89 million, including nearly $34 million for scholarships. The campaign also provided for the creation of six endowed chairs and professorships, the construction of the Knief Outdoor Athletics Pavilion, and the renovation of Clinton Hall into the McCoy Living and Learning Center.

In 2017, as the college entered the final stretch of the strategic plan, Colson announced the formation of “Focus on the Future,” a constituent engagement initiative that led to additional faculty and academic opportunities in the engineering program, new and deeper relationships with community partners and an increased commitment to ensuring that at-risk students have the same opportunities to succeed.

The initiative also led to the development of the Department of Health & Human Performance, which houses the new exercise science major.

With his support, Wartburg faculty have developed several new majors and areas of concentration, including the college’s first Bachelor of Science degree in engineering and its first two master’s level programs in music therapy and leadership. The college also entered into a long-term agreement with Wartburg Theological Seminary in Dubuque to offer an accelerated ministry degree program that allows participants to complete their bachelor’s degree and Master of Divinity in just six years.

“You only have to look around campus to see what he has accomplished,” said Mike McCoy, chair of the Board of Regents. “Under his leadership and guidance, we have the college positioned very well for the future.”

McCoy also praised Colson for his leadership through tough times at the college. In addition to taking the reins just as the country emerged from the Great Recession, Colson has led Wartburg through budget cuts and faculty and staff reductions, all while strategically allocating dollars in areas that could grow revenue for the school. More recently, his leadership has been instrumental in the college’s navigation of the ongoing pandemic.

“I don’t think he’s gotten enough credit for his ability to lead the college through these times,” McCoy said. “He’s had to make tough decisions, but he’s always been gracious about them and transparent about them. People may not have liked the decisions that he made, but he kept them informed.”

McCoy added that the loss would also be felt in Waverly and the Cedar Valley, where Colson was a member of the Waverly Economic Development Commission, Grow Cedar Valley and the Allen College board, as well as the vice chair of the UnityPoint Allen Health System board. He also serves on the Board of Directors for the Iowa College Foundation, the Board of Directors of the Iowa Association of Independent Colleges and Universities and a NetVUE advisory board, among others

In the coming weeks, the Board of Regents will begin the process of hiring a search firm and launching a national search for the 18th president of the college.