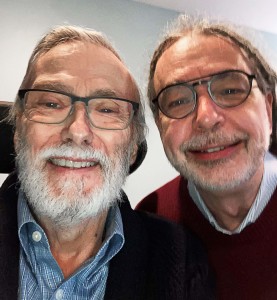 A $1.2 million gift from David McCartney and James Petersen of Iowa City has created a new position at Wartburg College, the Grant Price Endowed Archivist.

“Every college needs an archivist to preserve and transmit the history of the institution; in our special case, Wartburg also enjoys the opportunity to preserve and transmit the history of Iowa broadcasting to future generations,” said Darrel Colson, Wartburg College president. “Now, thanks to David and James, Wartburg can fulfill the potential that Grant Price imagined when he began collecting the earliest pieces of the Archives of Iowa Broadcasting.”

The Grant Price Endowed Archivist position is named for the pioneering Iowa broadcast journalist and former chair of the college’s communication arts department. It is the college’s 21st endowed faculty or staff position and the eighth in the past decade. The college seeks to fill this role in 2021.

“Grant Price dreamed of this day,” said Colson. “I can’t help but think that he’s broadcasting this story, a story of a dream fulfilled by David and James, on heaven’s own network.”

“Following Grant’s passing, we as a board worked with the development team at Wartburg College establishing the endowment funding that Grant had envisioned,” said McCartney, a founding member of the AIB in 2004 and chair of its National Advisory Board since 2012.

Other donors have made gifts to this fund that provides the AIB with modest support for its operational costs, but the lack of a full-time archivist remained a compelling need.

“James and I both felt that, in fulfilling Grant’s vision, this would be an appropriate way to help the long chapter that we have had in attempting to make this a lasting and permanent position,” said McCartney about the donation from him and his husband, a retired arts administrator and a longtime musician.

The Wartburg Archives include photographs, diaries and letters that tell the Wartburg College story, along with organized records that inform the college’s decisions today. The AIB collection contains an oral history project comprising hundreds of interviews that capture first-person experiences of Iowa’s broadcast pioneers, along with documentation from a variety of media outlets and vintage broadcasting equipment.

“I think Grant’s legacy in Iowa broadcast journalism is, without question, a very positive and lasting legacy that, long after Grant’s passing, we continue to recognize as really exemplary of what a good reporter does,” said McCartney, university archivist at the University of Iowa. “The values that Grant represented in terms of fairness and ethics are very important to remember. Our hope is that this endowed position will allow Wartburg and the larger community to continue to recognize that.”

Price was a pioneer of broadcast journalism and a household name in Eastern Iowa. McCartney met Price for the first time in 1992 while collaborating on a project documenting the history of Iowa. Price then asked McCartney to assist in the foundation of the Wartburg Archives and Archives of Iowa Broadcasting.

“For many years, David McCartney has donated his time and his expertise to sustain and advance the Archives of Iowa Broadcasting,” said Colson. “What a marvelous and appropriate thing it is, then, that he and James so generously donated the endowment that will support the Grant Price Endowed Archivist.”

Price later received the 2008 Midwest Archives Conference Presidents’ Award, nominated by McCartney, and wrote in his acceptance letter: “I can only say I am deeply honored to receive your organization’s recognition of our modest efforts to support the principle your profession stands for – the importance of preserving the historical record of the events and institutions which have shaped our culture.”

McCartney and Petersen received title to the Floyd County land in early 2020 following McCartney’s mother’s decision to dissolve the family’s trust. The land transfer in turn made possible their gift to Wartburg.

“My grandparents, Julius Huxsol and Ruth Carney Huxsol, were very committed to running a successful farm business at a time when it was really hard to,” McCartney said. “What I know of my grandmother is that she was a very strong believer in education. She was a teacher. While she wasn’t associated with Wartburg, my hope is that this is keeping with their outlook as well. I would really like to thank my maternal grandparents and my mother for facilitating this.

Those interested in contributing to the Grant Price Endowed Archivist Fund may contact the Development Office via phone at 319-352-8491 or email at development@wartburg.edu.
Visit Campus Recruit Me Apply Now