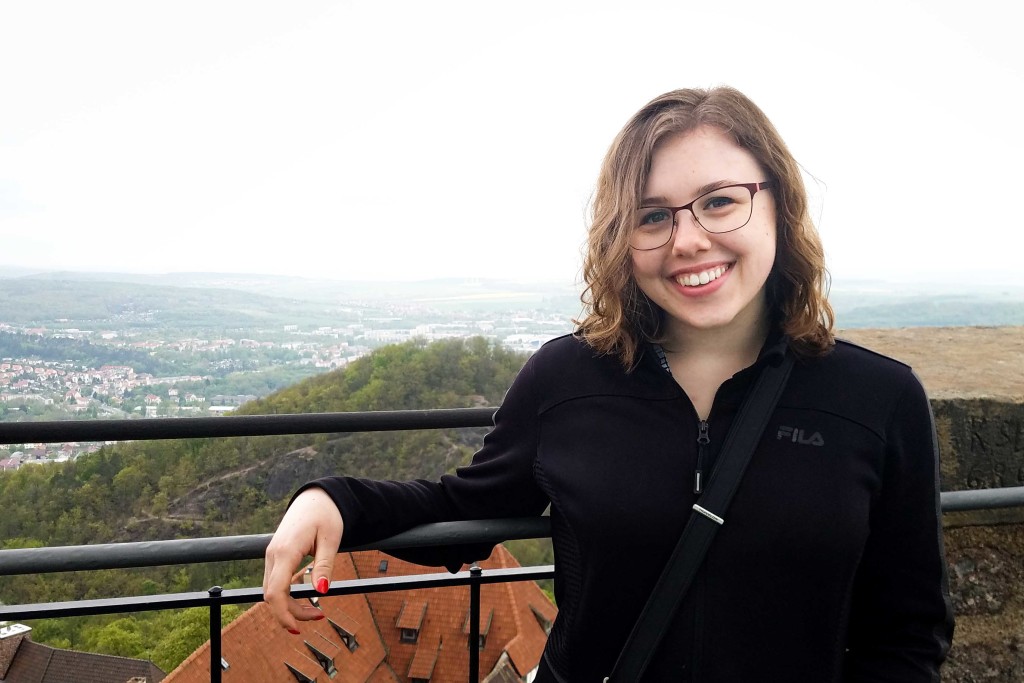 Emily Bingham stands atop the Wartburg Castle in Eisenach, Germany.

Wartburg College senior Emily Bingham was selected by the J. William Fulbright Foreign Scholarship Board for a Fulbright award to Germany through the program’s English Teaching Assistant Program.

Bingham, who is graduating with majors in international relations and German studies, will spend the 2020-21 school year in Germany, but has yet to learn where in the country she will be placed. The ETA Program places recent college graduates and young professionals as English teaching assistants in primary and secondary schools or universities to help improve foreign students’ English language abilities and knowledge of the United States while increasing the U.S. student’s own language skills and knowledge of the host country.

In addition to teaching, she also hopes to learn more about immigration and human rights programs in the country.

“Germany has been a leader in refugee acceptance throughout Europe. As a result of the world refugee crisis, there are many Syrians in Germany right now. That’s a big interest point for me and something I am passionate about,” Bingham said. “Germany has handled the situation differently than other countries, such as the United States. There are various programs for refugees throughout Germany, especially in larger communities, that accept volunteers. I want to be in a position to interact with refugees and assist with that during my year in the country.”

Upon her return to the United States, she wants to take some of what she learned during her Fulbright year to a nonprofit assisting immigrant populations and providing refugee services. Eventually she plans pursue a graduate degree in a human rights program.

“I really hope I can gain a better understanding of the educational and political systems in another country. As someone who ultimately wants to work in nonprofit or do advocacy work for refugees and immigrants, I think that having experience living in a country that handles these things differently and has a different social system will be very valuable,” she said.

Bingham has personal ties to Germany that have strengthened during her time at Wartburg, where she was able to spend a May Term studying in Germany with a Wartburg professor and other Wartburg students and five weeks interning at the Wartburg Castle, a UNESCO World Heritage site in Eisenach. The college is named for the castle, where Martin Luther translated the New Testament into German during the Protestant Reformation in the 16th century.

“I never would have had some of these opportunities had I not chosen Wartburg. It’s almost unimaginable to think that I interned at the Wartburg Castle, even though I know I did it,” she said. “I gave three tours to Wartburg groups while I was working there, and it was so cool to talk about the history of our school and the connection the college has with the castle.”
Visit Campus Recruit Me Apply Now