Davis to receive honorary degree from Wartburg College on Feb. 15 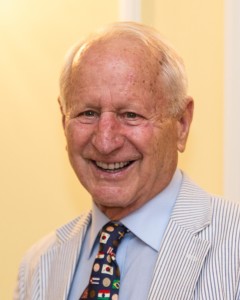 The ceremony will begin at 5 p.m. in McCaskey Lyceum in Saemann Student Center. It is free and open to the public.

Davis and his family have contributed more than $75 million to United World Colleges, a group of 18 schools on four continents. In addition, Davis spends about $50 million annually to fund Davis-UWC scholarships, allowing UWC graduates to attend one of the nearly 100 partner higher education institutions in the U.S. Wartburg first partnered with the scholars program in 2007 and since then has welcomed 218 students representing 82 countries to campus. Ninety-one UWC scholars from 51 countries are currently enrolled at Wartburg.

“The Davis UWC Scholars Program is the largest, privately funded international scholarship program in the world. There is no match for his commitment to international education,” said Edith Waldstein, Wartburg’s vice president for enrollment management. “We have been very fortunate to be selected as a partner for the last 13 years. To have him on campus to accept his honorary degree is a wonderful opportunity for our students and the campus community to show our gratitude for his commitment to higher education.”

Davis’s visit was prompted by a request from Josh Voigt, a senior UWC scholar from Ezulwini, Eswatini. Voigt was already a freshman at Wartburg when Davis visited Waterford Kamhlaba UWC of Southern Africa, Voigt’s former high school and the school where his mother still teaches. After learning that Davis had never visited Wartburg, Voigt reached out in November 2018 to see if the philanthropist would be willing to make a trip before his graduation in May 2020. Within days, Davis responded and said he would come.

“He will only be here for a day, but we are trying to create as many opportunities as we can for students to meet him and thank him,” Voigt said. “The only reason I am here is because of Shelby Davis. I attended a UWC school because I knew it would be a possibility to come to the U.S. because of him. Literally everything I have been able to accomplish is because of him. I don’t know how often he gets to meet the students he impacts, but for me, to say ‘thank you’ is a big deal. This man has invested so much in me, and it changed everything for me.”

Davis, who earned his bachelor’s degree in American history from Princeton University, started his career with the Bank of New York. He later founded Davis Selected Advisors, L.P., a mutual fund management company managing more than $60 billion. Upon his retirement, he co-founded the Davis United World College Scholars program with Philip Geier. Since 2000, the philanthropy has supported more than 10,000 scholars at U.S. partner colleges and universities.

Davis is an honorary trustee of the U.S. Ski & Snowboard Association and International Patron of the United World College movement. He has served on the boards of Princeton University, United World College-USA, the Hoover Institution and the Teton Science School.
Visit Campus Recruit Me Apply Now