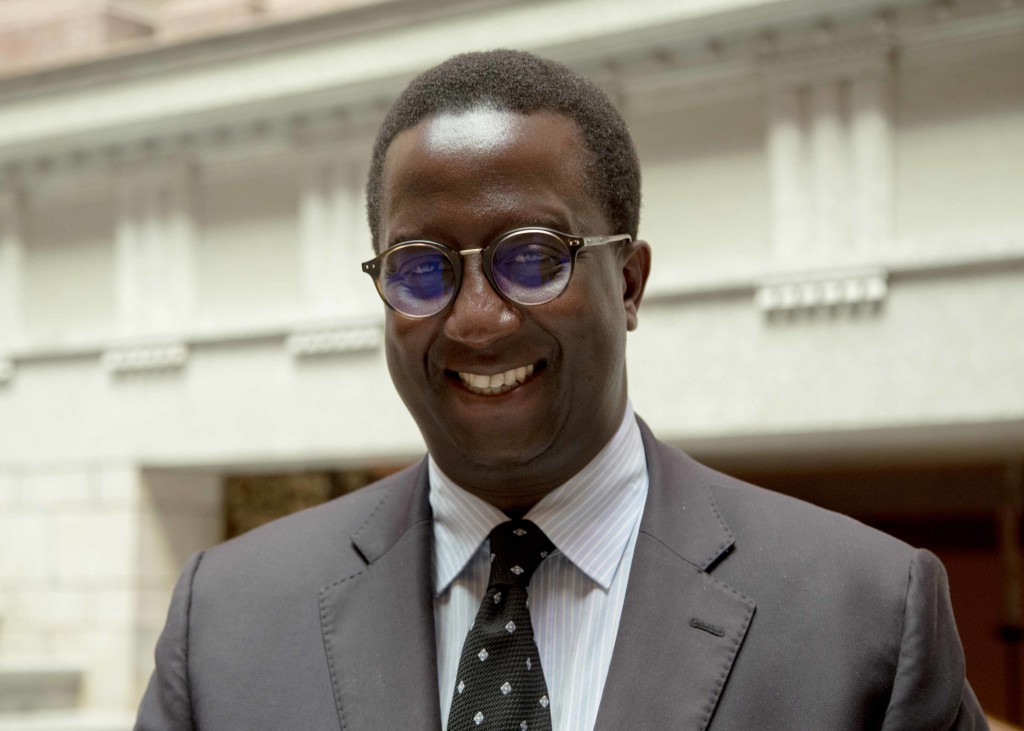 During a 30-day stretch spanning most of the month of May, Itonde Kakoma ’03 spent only a few nights in his own bed in Helsinki, Finland. Kakoma, who graduated from Wartburg with a degree in religion, is a member of the executive leadership team and the program director overseeing dialogue and mediation efforts in Africa for the Crisis Management Initiative (CMI), an independent Finnish organization founded by Martti Ahtisaari, a Nobel Peace laureate and former president of Finland.

In that four-week period, his work took him to Jordan, Switzerland, the United Kingdom, Sweden, and Norway, where he worked with others to help prevent and resolve political conflicts through dialogue and mediation.

“I am a first-generation American, the son of immigrants from the Great Lakes part of Africa. My parents came to the United States as professionals, but of course, their home countries were in turmoil for much of my childhood, which brought about a deeper sense of responsibility for them in terms of serving a wider community beyond where we lived in Illinois,” Kakoma said. “That also exposed me to a much wider responsibility. Our household was a place where intellectual and political conversations were a normal thing. People from all over the world, visiting scholars or friends, regularly spent time in our home, and that hospitality for open discussion really planted early seeds in me for engaging in the type of work I do now.”

His time at Wartburg nurtured that sense of responsibility while also providing him with a strong ethical foundation on which to think about global affairs. He even received the Dell Award for Peace and Justice as a student. After Wartburg, Kakoma went on to the University of Pretoria in South Africa, where he focused his honor studies on theories of reconciliation in post-conflict society. It was then that people at the Carter Center, a nongovernmental organization committed to human rights and the alleviation of human suffering founded by former U.S. President Jimmy Carter in 1982, first began to take interest in his work. He later helped the Carter Center with its work supporting the Liberian Truth and Reconciliation Commission, a partnership that ended with Kakoma in a full-time position with the Carter Center, where he eventually served as the assistant director for conflict resolution.

“The opportunity to witness an historic event as an international observer for the referendum on the right to self-determination for the people of South Sudan, which is the vote that led to the independence of South Sudan, that left a lasting impression on what it takes to not only declare statehood, but to declare a nation. The people of South Sudan and the leaders are still trying to do so and unfortunately there has been more crisis than peace since 2011.”

Though CMI was founded by an international statesman known for his ability to broker peace, Kakoma said the organization, tasked with tackling “some of the world’s more prolonged and difficult challenges,” doesn’t have the authority to impose agendas or officially broker peace. Instead, what CMI offers is the space for conflicted parties to work out their own solutions through a facilitated dialogue process. For Kakoma, that means supporting the efforts of the African Union based in Ethiopia, as well as other subregional organizations in Africa and the United Nations in the areas where CMI is active as an independent organization.

For every win, there is a setback, but Kakoma continues to find value in the work he’s doing and holds out hope for a more prosperous and stable future.

“Many conflicts globally are in fact preventable. This idea of prevention is a difficult thing to sell because you don’t know it is necessarily important until something goes wrong. To invest time in prevention is one of the most valuable things that can be done,” he said. “By doing so we are able to take seriously the grievances of various communities that may be isolated or disenfranchised. We are able to think forward about issues as they may emerge or unfold into the future. I think my generation will be forced to face a number of large challenges and provide leadership and responsibility on how to address them not only for today but for generations to come.”