Dr. Richard Wahl ’73 faced a crossroads as his time at Wartburg wound down: He could follow most prospective doctors down a reliable route into primary care or blaze his own trail in the world of medical research.

Today, not only the research world but the one at large can be grateful that the Waverly native took the road less traveled.

Shaped by experiences growing up within sight of campus and equipped with a hometown education, Wahl has gone on to reach the pinnacle of his advanced field, recently earning both the top annual honor and a lifetime achievement award from the Society of Nuclear Medicine and Molecular Imaging (SNMMI). 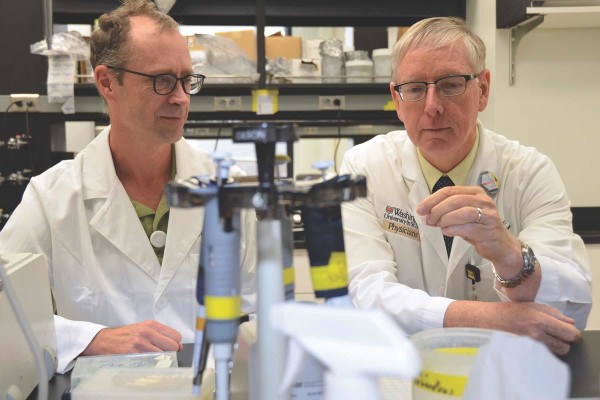 Wahl leads a department of 500 and directs one of the world’s premier radiology institutes. Impressive, to be sure, but it’s also just the most recent stop in a career full of life-changing discoveries.

After majoring in chemistry as an undergraduate, Wahl’s experience at the Washington University School of Medicine in St. Louis proved intense.

“It was quite eye-opening being surrounded by people who went to Ivy League schools,” he said.

Wahl honed in on radiology and quickly became involved in radioimmunotherapy — a then-nascent field centered on the design of antigens with radioactive agents to both image and fight cancer — including the development of an FDA-approved therapy for non-Hodgkin’s lymphoma. Following his training, he spent 17 years at the University of Michigan, highlighted by early contributions to positron emission tomography (PET), an imaging technique using radioactive material that has informed the care of millions of patients and remains one of the most common diagnostic tools for cancer.

Wahl became a professor and anticipated finishing his career at Michigan, but was recruited to Johns Hopkins University in 2000 to lead its nuclear medicine and radiology programs. Among educational and administrative responsibilities, he developed widely cited criteria for assessing PET scans to tailor therapy precisely.

“This idea is still really gaining traction because one dose doesn’t fit all,” Wahl said. “If they’re cured after four doses and you give them two more, those can cause toxicity and things like neuropathy, and they cost money. When possible, it’s good to de-intensify a therapy.”

In 2014, he returned to St. Louis to serve as director of Washington University School of Medicine’s Mallinckrodt Institute of Radiology, where he oversees the largest radiology residency program in the country and a research enterprise that ranks among the top recipients of National Institutes of Health grant funds.

Wahl holds 18 patents, has published more than 400 peer-reviewed scientific manuscripts, and is the primary author of several textbooks, but he also is passionate about passing the torch.

“I still find the work interesting, but it’s more exciting to see the next generation doing important work well,” he says. “We’re at a time when imaging is being used to detect disease at earlier, curable stages through quantitative, objective interpretations. Figuring out where radiology is going to be in five or 10 years is quite interesting.”

Advances are surfacing left and right: In radiology, artificial intelligence is helping interpret images. In the emerging field of theranostics, radioactive drugs combine diagnostic and therapeutic functions. In nuclear medicine, the tactic of fusing PET with other imaging methods — devised in part by Wahl — is helping physicians make more exact diagnoses.

It’s safe to say Wahl is pleased with the path he chose in Waverly 45 years ago.

“Academics can allow you to make important contributions to health care in a different way, and to innovate, which is so critically necessary,” he said. “There’s been a lot going on, and I’ve had great opportunities to be a part of some of that.”

No undergraduate coursework could have fully prepared Wahl for the technical side of his career. After all, he used slide rules for calculations in high school and recalls when the Wartburg chemistry department got its first microcomputer.

What Wahl did gain was a strong base upon which to build.

“I really found the breadth of training valuable, and I gained perspective from the non-science courses,” said Wahl, noting that the liberal arts setting also allowed him to be on the tennis team and hold a part-time job. “I had no way of knowing what I’d be doing, but I was well-prepared to adapt to opportunities as they arose.”

Wahl and his wife, Sandy, have four children, all of whom work in health care. Sandy also grew up in Waverly, where her mother still lives.

“They say that alongside anyone who has had success is usually a supportive spouse, and while that’s true for me, in this case there’s also a very surprised mother-in-law,” Wahl said.