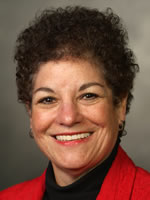 She will accept the award and deliver an address during an 11:30 a.m. ceremony in Wartburg Chapel. The public is invited. The ceremony will include music by organist Karen Black and the Wartburg Choir under the direction of Lee Nelson.

The Graven Award, now in its 28th year, honors one “whose life is nurtured and guided by a strong sense of Christian calling and who is making a significant contribution to community, church and society.” It is named for Judge Henry N. and Helen T. Graven of Greene, whose lives reflected those same commitments.

“As a biblical scholar, Dr. Jacobson devoted her life to educating others. Her passion and commitments as a laywoman are very much in keeping with the intentions of the Graven Award,” Kleinhans said. “Given Martin Luther’s work both as a teacher and translator of the Bible into the common language, so that everyone could read and understand the Scriptures for themselves, 2017 seems a particularly fitting year to honor Dr. Jacobson for her life’s work.”

Jacobson was director of the ELCA’s Book of Faith Initiative, created to increase biblical literacy and fluency, from 2007 through 2016. She spoke at the ELCA churchwide assemblies in 2011 and 2013 and the Lutheran World Federation 50th Anniversary Assembly in Hong Kong as well as numerous other synodical assemblies and churchwide gatherings. She currently serves on the Lutheran Arts and College boards.

“We are privileged to honor Dr. Jacobson with the 2017 Graven Award. In good Reformation tradition, her commitment to engage people of all ages and walks of life in deep reflection and wrestling with Holy Scripture has enlivened our church’s witness to God’s action in the world,” said the Rev. Ramona Bouzard, dean of the Wartburg Chapel and Moehlmann Chaplaincy Chair.
Visit Campus Recruit Me Apply Now